It has been one of the most requested emojis in the last year or so: the dab emoji! With the dab being a very popular expression amongst young people at the moment, it would only make sense if we could use this way of communicating through chats as well. That’s why we introduced our own dab emoji sticker. See for yourself, tell us what you think! 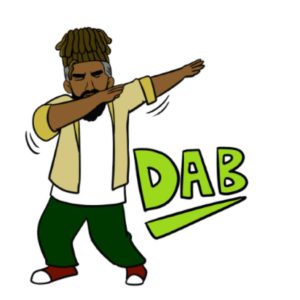 Online petition for the dab emoji

Someone has actually taken this a step further and filed an official petition on change.org in order to get Apple to add an official dab emoji to the system default emojis. We certainly support that cause!

The dab has originated in Atlanda by an artist called Skippa Da Flippa. It then really became mainstream in 2015 when Jason Derulo taught James Corden on his show. America never looked back since and is still dabbing all the way!

Getting arrested for dabbing!

The dab might seem like an innocent “dance”. The authorities in Saudi Arabia disagree. In 2017, Abdallah Al Shaharani was arrested for doing the dab at a music festival. The National Committee for Drug Control says that it “alludes to weed and other illegal substances”.